Each test is composed of the same types of questions, the same types of sections, and either 100 or 101 questions–or in the rare case of December 2010, 102. The seats are filled with talented, capable people who want to get into law school.

[ RELATED: How to Register for the LSAT ] 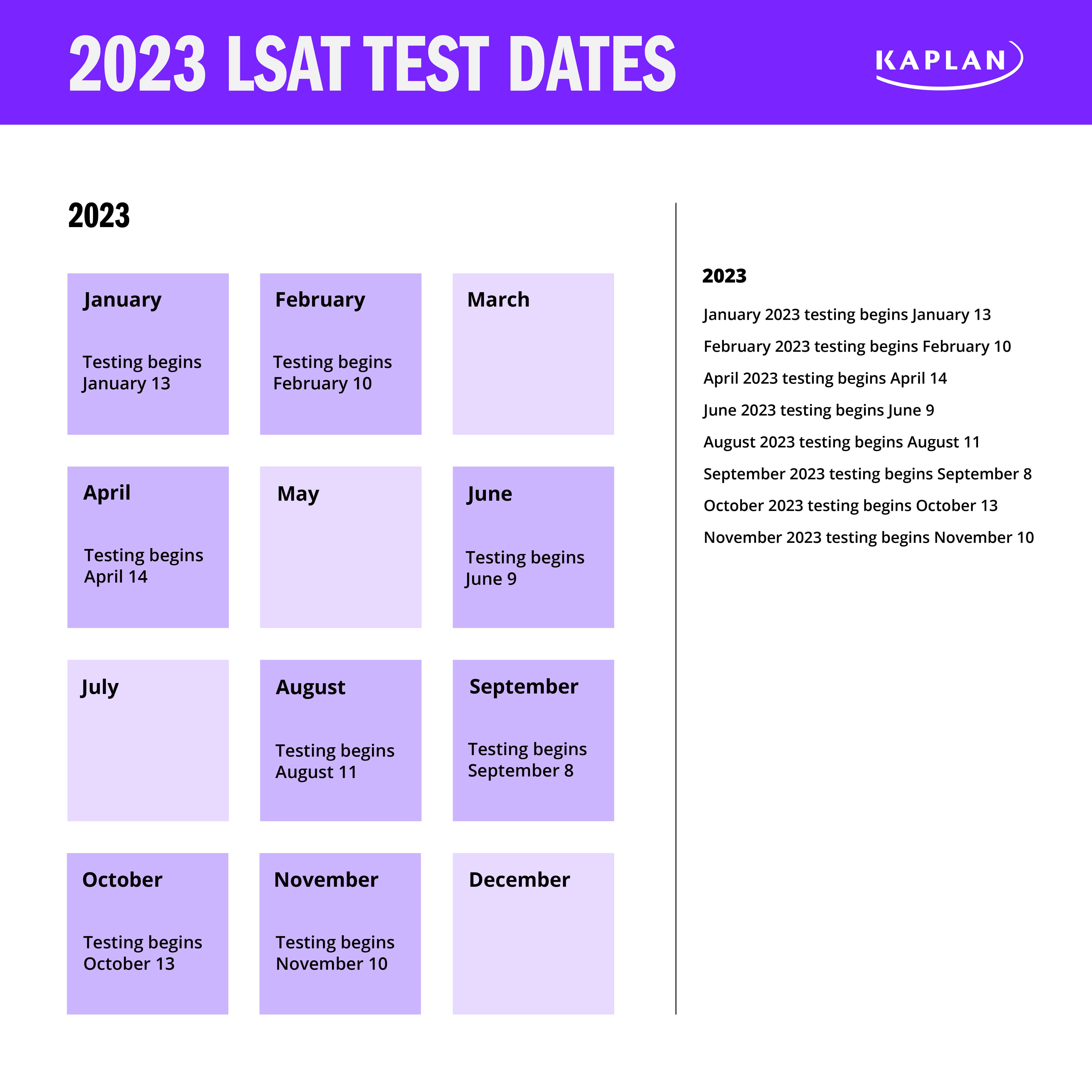 How Difficult is the LSAT?

Although difficulty on an LSAT can be subjective, there are good arguments to be made for some tests being tougher than others. But do those easier or tougher tests follow any discernible pattern? The short answer is no. And on top of that, it doesn’t matter.

Whether a test is easier or harder, all the test-takers at any given time are seeing the same test. While LSAC technically “equates” scores rather than putting them on a curve, the effect is very similar. An easier test simply means that everyone gets a couple more questions correct. LSAC relies on the fact that the number of test-takers is large enough on any given test date–and similar enough to pools of test-takers on previous test dates–to scale scores regardless of small variations in the test.

When To Take the LSAT?

When considering that a similar curve is used for every test and that a slightly easier or a slightly tougher test doesn’t matter, the only relevant factor when choosing a test date would be the pool of other test-takers when you take your test.

The thinking goes that if test-takers in Month X are less intelligent than test-takers in Month Y, then it will be easier to move up the curve. As a matter of pure speculation, if there were such a test date it would probably be December and/or February. These test dates are late in the admissions cycle, and the people taking that test are disproportionately repeated test-takers who underperformed on a previous test.

There is even research out there that suggests that you might be able to get one or two fewer questions right on recent December tests and get the same score. But let’s not get carried away. IF this effect is something more than coincidence, there are good reasons not to flock to the later tests.

First of all, if inefficiency in the system does exist, smart and driven test takers trying to take advantage of that inefficiency will likely be high scorers who end up canceling out whatever gaps in the curve there might have been.

Second, even if that doesn’t happen, LSAC may detect a systematic difference and use the leeway to “equate” scores to put all test-takers in a similar position.

Lastly, and probably most importantly, in order to take full advantage a perceived difference of maybe up to a point, you would have to take the LSAT almost a full year before you plan to apply for law school.

The admissions cycle is the most important thing to consider when deciding when is best to take the LSAT. 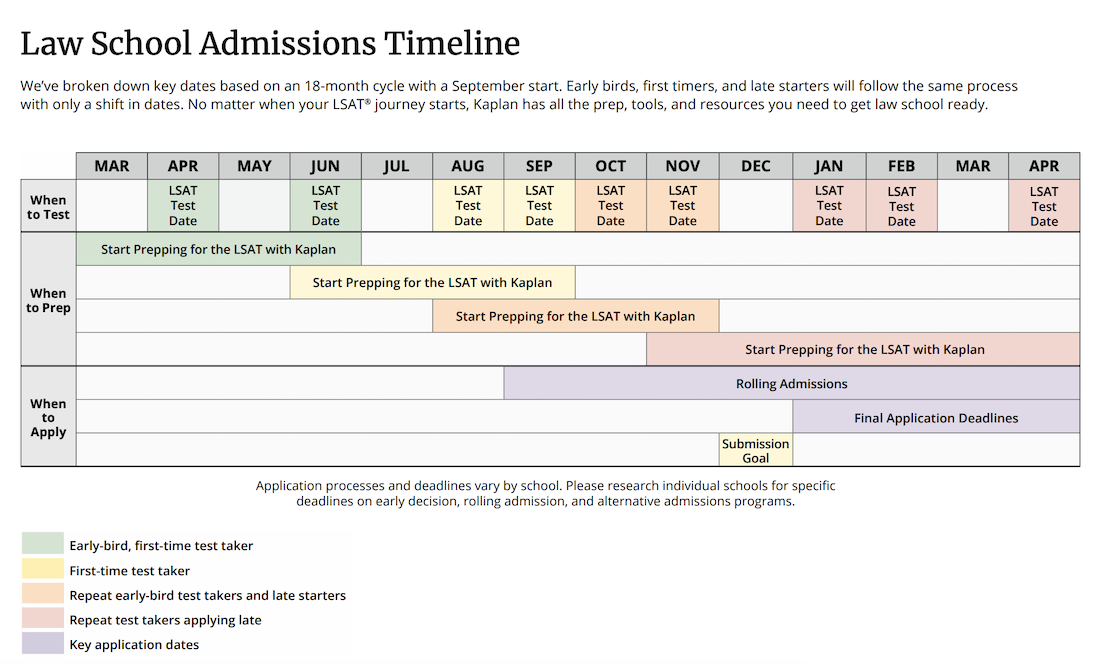 Law schools have rolling admissions. That means, getting your application in sooner gives you a significant advantage in the admissions process. Application periods open in the fall and a good rule of thumb is that you should have all your applications in before New Year’s. June, July, and September test dates are most popular for that because they allow for plenty of time to get scores back before applications need to be turned in. And so the moral of the story is to take the LSAT when you know you’re going to have a good amount of time to spend studying for it, but early enough to be on the top of the pile when application season opens.

How many times should I Practice the LSAT?

Students should plan to practice the LSAT at least 10 times.

At Kaplan, we require students to take some exams in class, which is extremely helpful to students in two ways: (1) it forces students to take an LSAT under time conditions with actual LSAT questions & (2) it gives the students detailed feedback from question type to difficulty level so that they may identify their greatest areas of strength and greatest areas for potential LSAT score increases.

The key is that a student must practice the skills they will need to perform well on the day of the scored, actual LSAT. The LSAT has nothing to do with knowledge and has everything to do with skill.

Thus, when a student learns the approach to each individual question type and then practices that approach/skill on a timed LSAT practice test, they begin perfecting that skill–and, just as importantly, identify the skill areas that need continued refinement. We encourage all of our students to begin taking additional practice tests alongside the LSAT class in order to begin working on efficiency, timing, endurance, and pressure reduction. Some of the tests are painful and tough for students at first, but that is an element of learning and progress.

How many times should I take the scored LSAT?

Now, as far as how many times you should expect to take the actual scored LSAT, that’s easy: once. Forget the stress, time and money involved; as some law schools still average multiple scores and all law schools still receive all scores within the past 5 years, why put any doubt whatsoever in the minds of admissions committees by submitting anything other than one, stellar LSAT score. After all, if you follow the advice of people that have accomplished what you are trying to do, then the actual test day should never, ever, ever be your first time taking the LSAT.

How many times can you take the scored LSAT?

LSAC places annual (3x), multiyear (5x), and lifetime (7x) limits on taking the LSAT, so don’t use an official test as a trial run. Only take the LSAT when you’re fully prepped and regularly hitting a practice test score that you would be happy with on test day!

How to Register for the LSAT

Take the LSAT: Your Test Day

Careers in Law: Why Become a Health Care Lawyer?

A Guide To Law School Outlines